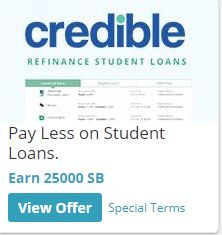 I recently took advantage of an offer from Swagbucks to get $250 for refinancing my private student loans at a lower rate through Credible. It turns out I was able to lower my rate to 3.76% for a 10-year repayment term, which is 1.24% lower than my previous rate on a 7-year refinance I completed last year. While I don’t plan to drag out the repayment of this loan over 10 years, the added flexibility of lowering my monthly payment by about $80 at such a low rate was quite appealing – not to mention the $250 just for completing the refinancing!

I was offered a range of repayment terms and interest rates, including fixed or variable, and decided to stick with a fixed rate loan since the variable rates were never more than a half percentage point lower and we are currently in a very volatile interest rate environment. Most private student loan lenders tend to peg their variable rates to the 1-month LIBOR (London Inter-bank Offered Rate), which is currently around 0.11% so the chance of your variable rate dropping significantly is essentially nonexistent, plus a margin based on your credit worthiness. Most lenders will offer a 0.25% rate reduction for setting up automatic payments and the lender I chose also offered an additional 0.25% rate reduction if I opened and used their own checking account product in order to make payments, but I declined this second discount option.

While I’ve successfully paid off most of my private student loans, I still hold a very substantial amount of federal student loans that are expected to be part of the Public Service Loan Forgiveness Program (PSLF) after achieving 120 months of repayment while in a qualifying public service job. During the Covid-19 pandemic, the federal government has frozen interest rates at 0% and suspended required monthly payments through at least September 2021. But, even during these months of suspended payment requirements, the months continue to count toward student loan forgiveness for PSLF and traditional income-based repayment forgiveness after 20-25 years. This has proven to be a significant savings to anyone working towards PSLF forgiveness since the suspended payments are able to be saved, but still count toward the tax-free forgiveness at the end of 10 years. If the federal loans begin having to be paid on beginning in November 2021, that means 18 months of saved payments! Diverting those funds to a retirement account would be a great way to maximize this opportunity and I have been doing just that. In 2020, that meant $19,500 went to the employer retirement account and another $6,000 to traditional and Roth IRAs. For a federal loan borrower with an IBR payment of $500/month, that’s an extra $9,000 saved to retirement accounts over the 18-months plus any additional tax savings!

Congress has also recently passed legislation that makes all student loan forgiveness tax-free through the year 2025. This was done in order to make any student loan forgiveness enacted via executive order automatically not incur a tax liability, as most forgiven debt is currently treated as a taxable event by the Internal Revenue Service. The Income Based Repayment (IBR) plans for federal student loans, which allow for taxable forgiveness after 20 or 25 years, were created in 2007 so this tax-free provision will expire before the first of those IBR loans begin hitting the 20-year mark for potential forgiveness. Because of this 2025 cutoff date, it appears that only loans specifically forgiven over the next four years will ultimately be tax-free. While President Biden has been waffling on whether or not he will introduce any student loan forgiveness via executive action, at least we know that the forgiveness will not come with a tax bill.

May 2021 Net Worth Update – Positive Net Worth!